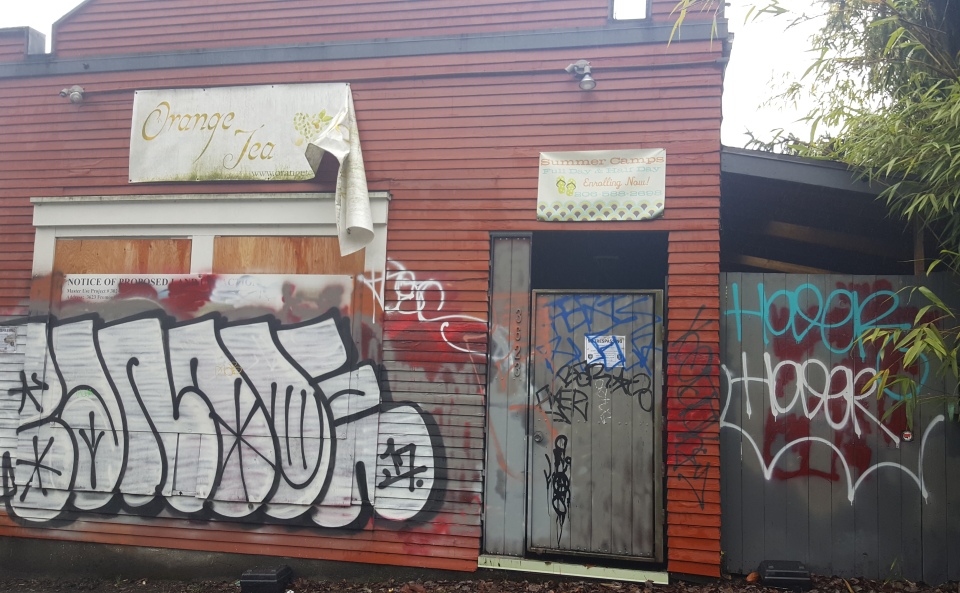 Call it a resolution, a challenge or a whim. On Saturday, January 6, I took a walk in Fremont and plan to do so every week I’m able to this year. Fremont, Center of the Universe, has been where I’ve lived, worked or written over the past five years. It, like the city as a whole, is undergoing seismic changes that will once again redefine this unique neighborhood.

The Puget Sound region is booming and it’s the talk of the town. The ever-present growth and change are overwhelming; occurring at a pace that is difficult for residents to comprehend. A wave of nostalgia has swept through many communities and social media (@vanishingseattle). Although I’m a relative newcomer (circa 2012), this is my attempt to document and process the evolution of my Seattle home.

I found Fremont at age 22 when I moved to Wallingford, the next neighborhood east, after graduating college and traveling a bit. Tired of unpacking and thrilled about my new life in Seattle, I wandered out the door on a grey February afternoon and headed to “The People’s Republic of Fremont” to see how much counterculture was left.

In reality, not much, but the strong local community, quirky public art installations and plethora of watering holes I found delighted me.  I also loved the size of Fremont, I could see it all. Less than one-mile square, the neighborhood starts to the south at the historic Fremont Cut then drapes over a steep hill to the north where all roads lead to the Woodland Park Zoo.

I hadn’t gone that far yet though. That first wander on a quiet weekday afternoon I made several stops I’ll never forget. I bought a plant to kill at the Indoor Sun Shoppe where I still buy plants (fewer of which die). I discovered the cheapest microbrew happy hour at The Red Door, which in the daylight presents itself as a casual neighborhood pub but often became a sloppy party scene on the weekends. For a time when I still watched sports, their TV was my TV.

I also stumbled upon Brouwer’s featuring 64 ever-rotating taps, a mecca for beer fans from near and far. With tall bar chairs comfortable enough to sit and stay a while, I read that week’s issue of The Stranger, still one of my favorite solo pastimes.

I looked in shop windows, noted restaurants and took in the many other strange sights: the Rocket, the Lenin statue, and the Troll. There were also strange smells: soft notes of chocolate from Theo, the ripe smell of city dumpsters and on my way home, a warm whiff of hops. They were brewing beer here!

My last stop that day, now part of Seattle craft beer lore, was the original Urban Beer Garden (UBG) setup in Fremont Brewing’s load zone each afternoon. A fraction of its current size, the original UBG was clever, popular and often crowded. Perched with a good beer on a bench supported by kegs with my new plant and a list of more places to go, it hit me: this is gonna be a great adventure.

5 years in, including a year and a half as editor of the local blog Fremont Universe, I look at Fremont with a very different eye. I’ve seen things come and go, heard about what once was and often wonder, “what will come next?” Here’s what I saw on my recent walk: 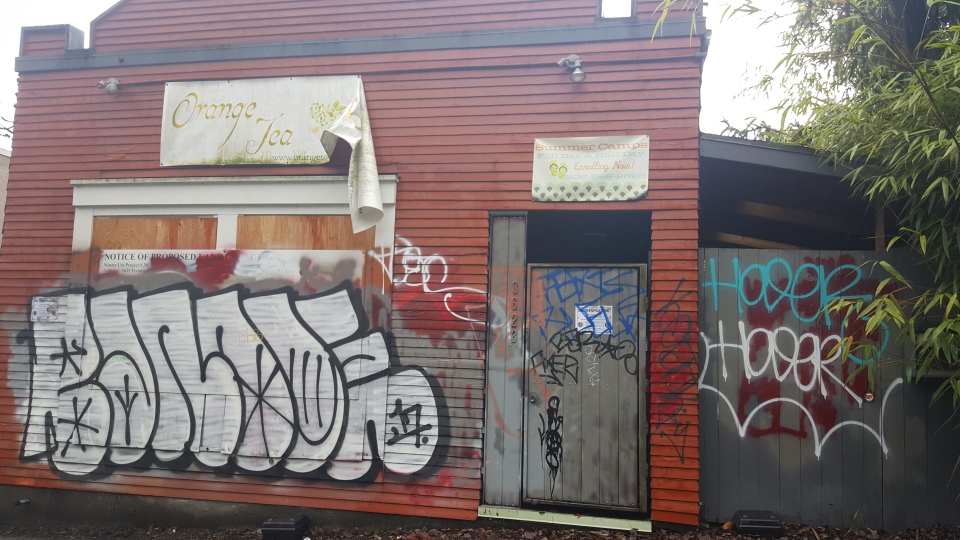 3623 Fremont Ave N. – After a fire in 2015, the Orange Tea Preschool and its owner, who also lived in the building, were forced to relocate due to extensive damage. Two 4-story apartment buildings are proposed for development on the lot. A demolition permit was reviewed in late 2017. 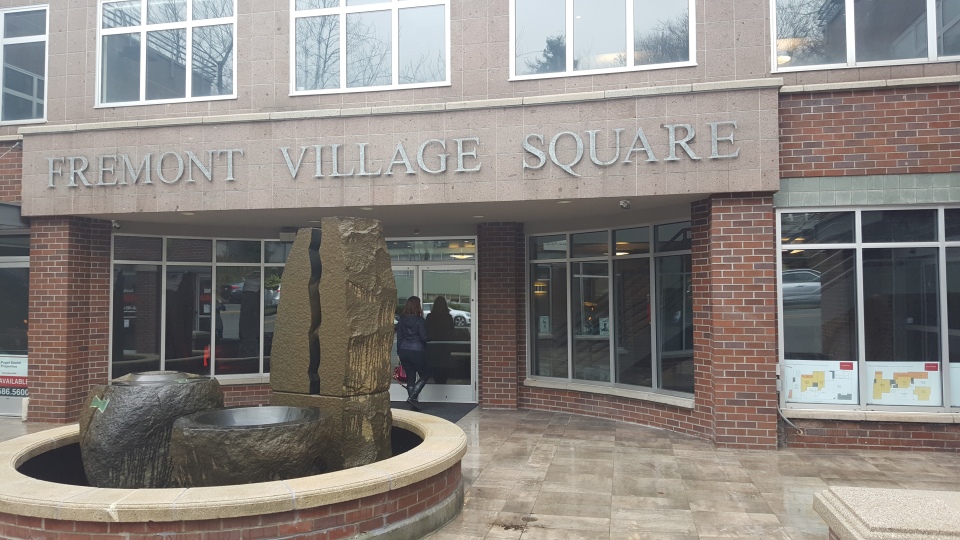 3601 Fremont Ave N. – Fremont Village Square has always been mysterious to me. In my time, several restaurants/bars have come and gone (Hunger, Kylie’s Chicago Pizza and It’s ALWAYS Happy Hour), the Fremont Health Club relocated and that’s just on street-level. 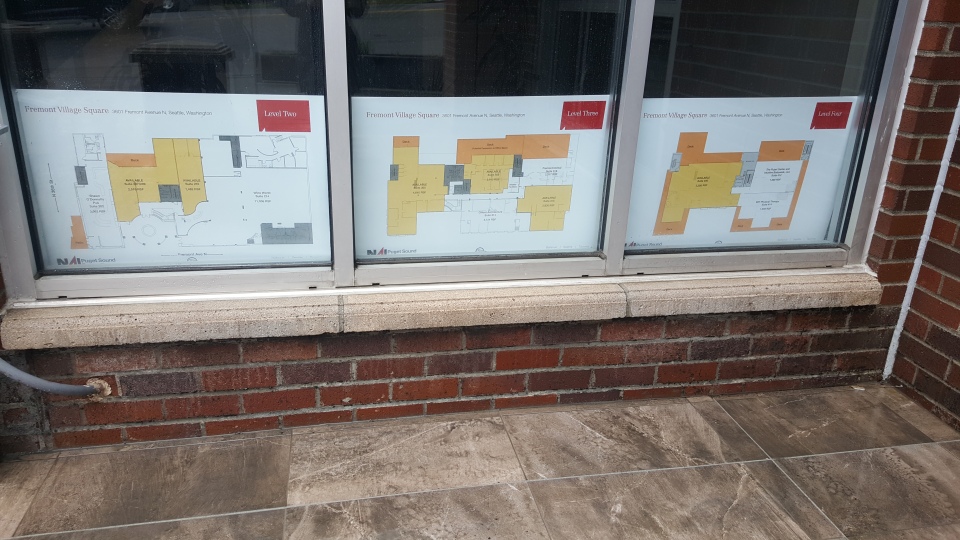 3601 Fremont Ave N (cont). – Built in 1996 and reportedly sold for a whopping $15MM in May 2017, Fremont Village Square lists approximately 6 suites currently available across three levels. I think we can expect some new tenants in 2018 and I’ll be curious what kind of businesses are attracted to this prime location that’s only 36% occupied. 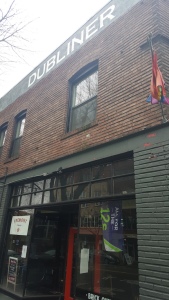 3517 Fremont Ave N. – A sign from a different time. I covered the transition of the Dubliner (a dive-y Irish pub that got crowded on trivia nights) into the food and beverage branch of the Hotel Hotel Hostel located upstairs. Brick oven pizza and hip decor were introduced, both of which remain in the pub’s current incarnation: Fremont Tavern (it’s not the first to bear the name), focusing on sports and no longer owned by Hotel Hotel’s owners. Although it got a paint job, this was not the first Dubliner location. Ghosts of Seattle commemorates the original location at 3411 Fremont Ave N that drew a “diverse and family-like group of patrons that gathered there from the late 1990s to 2001.”

The Coffee Shop of the Future

My destination comes with a disclaimer: “I had a gift card.” Typically, this Starbucks would not be part of my route or routine but $25 worth of coffee and breakfast sandwiches is motivating and ultimately, inspiring.

Sitting in an armchair enjoying prime people-watching, I thought about how to take my constant observations about Fremont and do something with them. To write about the changes I see, to share them and maybe, to help process them. Now you’re reading the first installment.

One of the biggest changes I saw in that moment was how different Starbucks is from other local coffee shops. This efficient and modern Starbucks seemed more appropriate for an orderly academic or company campus. Not here, across from the blue and orange Fremont Bridge with the busy bus stop and Real Change vendor outside. Although it provided for my coffee and snack craving, this Starbucks did not reflect the Fremont community as I know it.

However, watching a variety of individuals, friends and families bustle in and out made me challenge that perspective. It occurred to me that maybe this Starbucks reflected a different part of the Fremont community. Coffee shops, especially in the Pacific Northwest, are a core part of people’s routines, neighborhoods and social lives.

So, as I observe and describe Fremont in flux, I will also discover the many sides of this community by ending each walk at a different coffee shop. Perhaps starting at Starbucks, an iconic Seattle brand that has achieved almost incomprehensible growth since 1971 is fitting.

Coffee empires aside, the very storefront I was sitting in has its own storyline of change: Starbucks moved into this corner suite of the Epicenter building a year after the Peet’s Coffee closure left the space vacant. Before the Epicenter building (commercial/retail on the ground floor, apartments above – you know the drill) rose up in 2004, a hundred-year-old building whose current and past tenants include The Red Door and The Old Dubliner respectively, was moved down the block. Just across the street, the Greek institution Costas Opa closed in 2012 after 31 years in Fremont to make for a financial institution: a Chase Bank. Fremont, constantly changing since 1891.