I am quite exhausted and sore but also very content. Since disembarking the ferry, we spent two nights at the house where my friends are caretakers. They affectionately call it “Dougland” and it is a mesmerizing place indeed. A fairly well-established homestead, it is just across the Wrangell Narrows from Petersburg and accessible by a small fishing boat, everyone calls them skiffs here.
“Dougland” is “well-established” as it has plumbed water in the main house, off-the-grid electricity, and a grand piano. We’re still not sure how they got that there. The main house is a snug log cabin filled with books, antiques, photos from Doug’s fascinatung lifetime, and many tributes to Alaska and classical music. It is so filled and layered that two days wasn’t enough to observe and process what we were surrounded by. And that’s only the main house!
Also on the property is a net house (used as a workshop and filled to the brim), a woodshed, a hobbit-esque sauna, a smoke house, a tower that houses the electrical and water systems, a gazebo with a Nordic style row boat stored in it, a guest cabin, and a partially built wooden rowboat museum. I enjoyed several rainy walks poking around all these structures and the garden. A creek runs behind the main house as well so we had waterfront views on every side.
Monday, our first full day in Petersburg, Ali and I stayed at the house with another friend, Cat, while everyone else headed into town on errands. As tends to happen at weddings when there are large gatherings, a mish-mash of people, and some wonky logistics, both failure and hilarity ensued.
Our task was dishes and dinner. And while that may sound easy enough, I have learned that nothing is simple on a homestead.
Admitted city-slickers, Ali and I were suppose to be supervised by Cat, an experienced farmer who had been staying in “Dougland” longer. However, while she was away on a phone call we managed to pick chard instead of rhubarb (Now I know the difference!), terrorized a garden bed for potatoes, cut my finger (it’s official, I need knife prep lessons), and caused a fireball to leap out and singe Ali’s arm hair while trying to light the old-school propane oven. No one was (seriously) harmed in the process except the poor chard plant but eventually we ate that too.
By the end of the day we had some successes though! Once we were directed to the actual rhubarb we made a rhubarb/apple/berry cobbler with an oat crumble on top. The potatoes, carrots, and turnips from the garden were roasted with onions and garlic. A fresh salad was concocted and the sockeye salmon was grilled. With some extra help we made dinner for 11, laughing and learning along the way.
But that isn’t the real reason I’m exhausted. The bride-to-be wanted to keep things simple for her bachelorette and have a ladies night at a nearby USFS cabin. Ok, no problem, sounds fun.
However, my body is accustomed to the demands of a desk and city and this backpacking adventure was definitely out of my element. The good news is I have a stubborn streak. After a half mile of uphill scrambling with my pack on and unused muscles expressing their opposition, it kicked in and I only thought about the satisfaction reaching the top.
4.1 miles in total, the hike to Raven’s Roost include 2 steep miles uphill in the lush, damp, and muddy rainforest. Our first reward was lunch at a look out where we could see the Wrangell Narrows, the creek by “Dougland” and some small islands called the Sockeyes. Some of the other ladies began gathering Hedgehog mushrooms and showed us how to identify them. We also learned about the various names for winter chantrelles and how to tell when Chicken-of-the-woods is too woody. 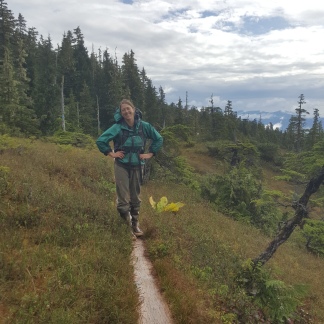 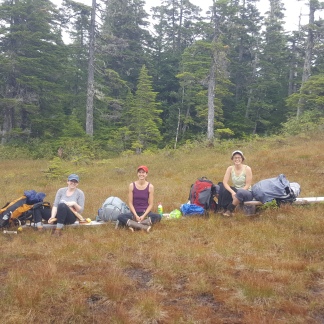 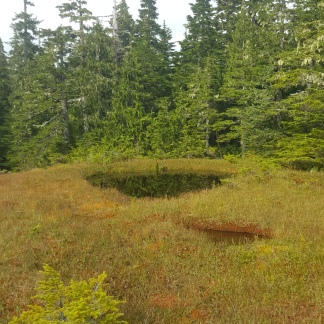 We also took turns lugging a 3-gallon gas can for the stove. It was especially tricky at times with all the slippery surfaces but these Alaskan ladies are tough and seem to have unlimited energy. My stubborn streak kicked into high gear again. Slowly but steadily I continued to climb at the back of the group.
After lunch, the trail was a little more level with some ups and downs as we crossed the Muskeg (peat bog) and occasionally wound into the forest. Parts of the trail weren’t in good condition though and without soil and roots to replace the boards, we had to cross large muddy gaps and puddles. Anyone wearing Xtra Tuffs, the signature Alaskan rubber boot, easily charged ahead. My hiking boots were tall enough in some spots but at others I tiptoed around with various levels of success.
After crossing this rugged, moist terrain we saw the cabin appear over a hill. Almost there! The views were definitely worth it and the cabin was sparse but comfortable. The final moment of torture though, was learning there were gallons of fuel stored in the cabin and our leaky, heavy jerry can was not needed.

By dark, all the ladies had arrived, 11 in total. With the extra bodies and the Nordic stove was humming along it was warm and time for dinner. We made mac and cheese on the stove top. Cooked up more garden veggies (chard included!) and threw in the hedgehog mushrooms.
Cozy in our cabin, overlooking Mitkof and Kupreanof island, we sipped wine and shared stories. We toasted our dear friend who brought such a wonderful, interesting, and strong group of women together in this beautiful, remote place.
So, tired and sore I may be, but getting to share this experience and conquer that trail is more than content, it’s exhilarating.