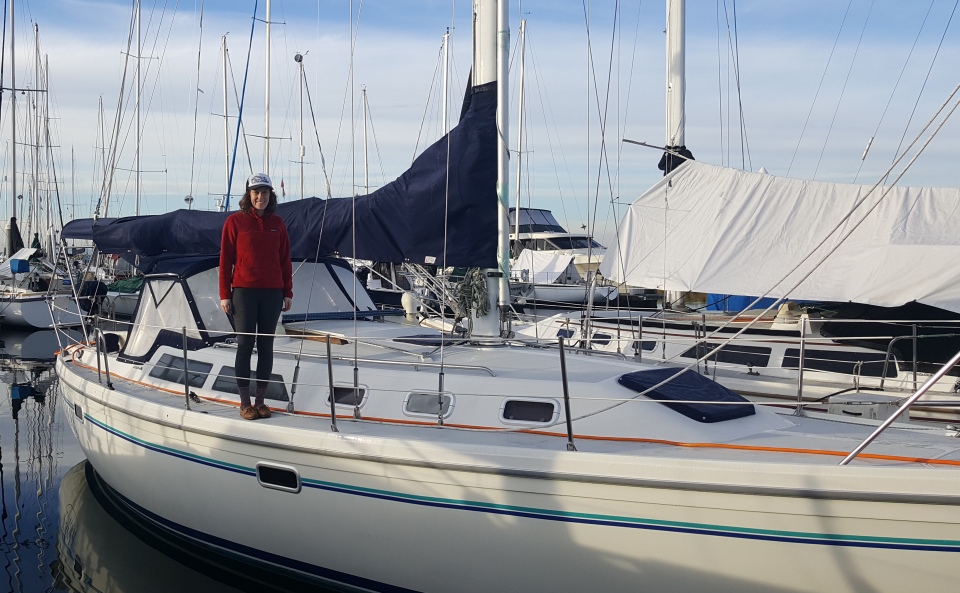 I’ve owned Capi, a 1994 Catalina 34, for exactly one year. I spent the year before that searching for a boat. I looked at dozens of boats online and checked out more than 15 in person before finding Capi in Oak Harbor, WA. That journey is a whole other story.

Before finding my boat, I hadn’t decided on a name. I figured that if the boat came with a decent name, I’d just leave it.

With Sea Bear or Fairwinds that probably would’ve been the case. However, with Freedom, Thor’s Hammer and the final boat I saw, K-Mak, it was clear I needed a name of my own choosing.

K-Mak was also exceptionally personal, a tribute to the former owner’s parents. I wanted a name that was personal to a point, practical and fun.

Some contenders that I considered:

“Capi” was the nickname of Muriel Wylie Blanchet, born in 1891 in Montreal, Quebec. A variation of “captain”, I first came across Capi while reading Blanchet’s memoir, “The Curve of Time.” I’ve written about Capi before and her British Columbia cruising expeditions with her five children, sometimes with a dog in the dinghy, on a 25-foot powerboat, have become lore in the Pacific Northwest’s maritime culture.

I admire Capi, a widow, mother and a pretty practical woman for many reasons, some I reflect on most often are:

I can’t remember exactly how long ago, but the first time I picked up a copy of “The Curve of Time” was while watching my colleague’s cat and house while they traveled. I didn’t realize until later, but Lisa had purposefully set out that book knowing my love of boats.

Out of this small, thoughtful gesture from another bookworm, I came to learn about Capi and her adventures. It made me think about how wonderful it must be to go cruising. I thought, “I should do that.”

Capi’s memoir made me believe I could do things I haven’t learned yet, especially when it comes to an engine. It made me want to see all the natural beauty tucked into this corner of the world, instead of searching for adventure abroad.

It made me want to pursue a lifestyle that makes me happy in thousands of small ways, but it does take a bit of extra work, especially with boats. In learning about the world of M. Wylie Blanchet, my world expanded.

So, long before the “official” renaming ceremony on June 11, 2018, attended by the esteemed Kuhlcats (my parents Bob and Sandy) who are unfailingly supportive and have now both read “The Curve of Time”; my boat became “Capi” to me.

The first time I ever sailed my boat in December 2017!

Sweet treats for Capi and me from friends

My gifts to “Capi” in year two:

One thought on “Why I named my boat “Capi””